Process to fill a vacancy

If a vacancy arises on the town council, due to an existing councillor’s resignation, disqualification or death, there is a process to fill the vacancy.

NOTICE IS HEREBY GIVEN that a casual vacancy is deemed to have occurred in the office of Councillor for the Bromyard and Winslow, Bromyard West Parish Ward following the resignation of Paul Geoghegan.
Rule 5 of the Local Elections (Parishes and Communities) (England and Wales) Rules 2006, provides that on a casual vacancy occurring in the office of Parish Ward councillor, an election to fill the vacancy shall be held if within fourteen days* after the date of this notice (i.e. no later than Wednesday 27th July, 2022) has been given in accordance with section 87(2) of the Local Government Act 1972, notice in writing of a request for such an election has been given to the proper officer of the council of the district within which the Parish Ward is situate by TEN electors for the Parish Ward.
If a request for an election is not received by the above deadline then Bromyard and Winslow Town Council will co-opt a person to fill the vacancy as soon as practicable in accordance with the Local Elections (Parishes and Communities) Rules 1986.
If there is an election, it will take place not later than Thursday, 29th September 2022.

One casual vacancy for Bromyard West MUST be filled by election.

As there were an insufficient number of persons nominated to fill this vacancy when advertised on a total of 8 occasions, Herefordshire Council has advised that unless another vacancy arises and an election is called for, the election for this vacancy will roll forward to the ordinary full term local government elections on Thursday 4th May 2023. 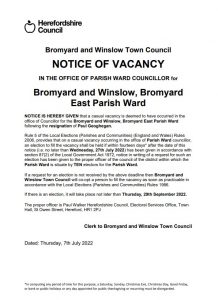 Who can become a Town Councillor?