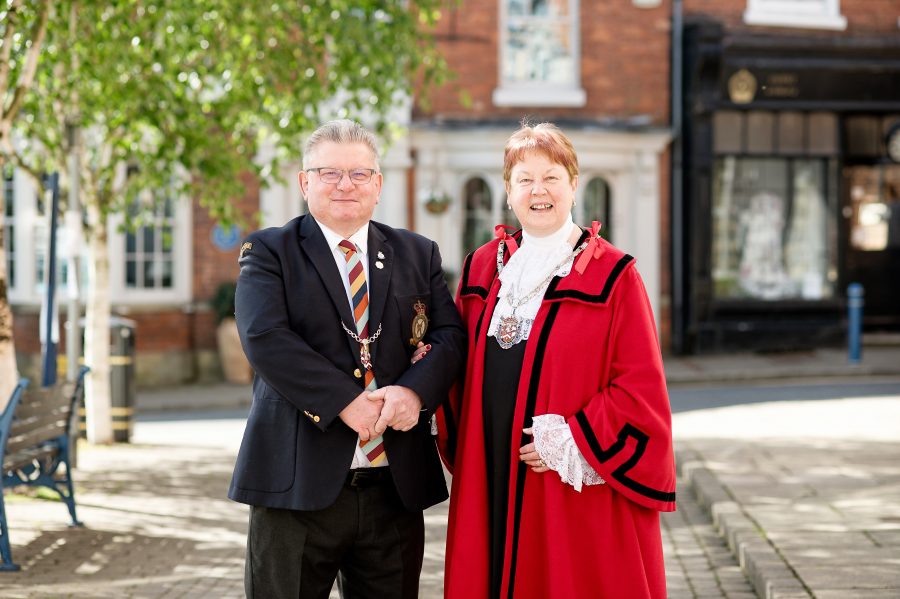 Councillor Dr. Dee Dunne-Thomas was elected to the office of Town Mayor at the Annual Meeting of the Town Council in May 2022 for the civic year 2022/23.

Councillor Dunne-Thomas is the 19th  Mayor and Chair of the Council.

Supporting her in this role will be Councillor Mark Franklin, who was elected Deputy Town Mayor (Vice-Chair of the Council).

In 2016 the Mayor and her husband Roy Thomas moved to Bromyard from Sutton Coldfield in the West Midlands. Her background is in education having worked in voluntary-aided, state and private schools and spent 12 years as a Headteacher of a primary school in Birmingham. Cllr. Dunne-Thomas has been a Governor of both primary and secondary schools, a Sixth Form College and a College of Education. She is a Doctor of Education from Birmingham University specialising in management and leadership. After taking early retirement from teaching, Cllr. Dunne-Thomas worked part-time for several years for an International Charity.

Her chosen charity for 2022-23 is Bromyard Guiding which cover Rainbows, Brownies, Guides and Rangers.

After being installed as Mayor, Councillor Dunne-Thomas said “It is an honour to be voted as Mayor of Bromyard and Winslow Town Council and I thank all my colleagues for their confidence in me.  I will do my best – with the great support of my Consort – to serve the Town of Bromyard and its people to the best of my ability”.

The Mayor is delighted to receive invitations from local organisations to attend functions and fundraising events. The Mayor also represents Bromyard at functions outside the town.

If you or your organisation would like to invite the Mayor to a function, please download and complete an invitation form

When introducing the Mayor at your event, please address her as “Town Mayor of Bromyard, Dee Dunne-Thomas”.

If the Mayor is unable to attend your event, you may wish to invite the Deputy Mayor, Cllr, Mark Franklin to attend.